Following a good day of training on Friday I decided before bed to complete a long run in the morning. Plan in my head was a 70K road run. Figured if I got up at around my normal time – fuelled up on porridge and honey, I could be out the door before 7.00am and be back around lunchtime to enjoy the rest of the day. The 4.44am alarm went off as normal and after a couple of ‘snoozes’ I was burning my mouth on some hot porridge in a dark unheated house. Other than the breakfast related huffing and puffing it was silent and still – I guess everyone was were where they should be on a Saturday morning – in bed.

Next up, hydration – bladder was filled but annoyingly I was running low on energy powder so dropped a ‘Zero’ electrolyte tab in to top it up. The financial excesses of Christmas had meant I’d only ordered more on Friday (payday) – it’s all so expensive and there were no guarantees that the postman would turn up. So, energy for the run was:

All packed into my OMM last drop with waterproof jacket, spare hat and gloves, phone and bank card in a (now busted) Haglofs Watatait (grrr – will be speaking to them!). I’d forgotten to get money out the bank but the card was there for emergencies. So, with the orange glow of the streetlights guiding me to the front door I stepped out in my Nike Lunaracers and pressed start on my watch. I’ve been getting a little bit of stick for running these kind of distances in such lightweight flats. Not entirely sure why? They just work for me – granted at times like any other runner my knees get a little sore but I suspect it’s the cycling that does just as much in terms of irritation. My running style is something that I’ve been working on for the last 6 months and its made a huge difference to my overall efficiency – this is maybe why I can get away with racing shoes. 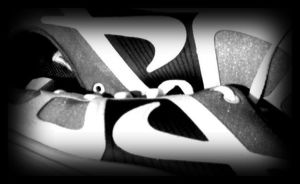 Within an hour the sun was up and the world was awaking. It’s quite nice being completely in a world of my own and seeing tiny snippets of people’s lives as they get up to enjoy their weekend, work or regret what they did last night. I had a couple of loops in mind to make up the distance. One that’s about 40K another that’s 50K. So I figured if I added at least 15K up front I’d have enough room to up-it at the end should i need to.

First 1:20hr went smoothly – deliberately trying to keep things slow. First gel of the day was squeezed as the paper / milk boys were dropping the last of their orders just before 8.30am. The Cherry bombs are pretty good – not as gloopy as some of the others. Kinda like an over-cooked fruit compote.

Then came across a cycle path (Cycle network 7) and figured I should at least add a few k’s down that – got to be better than the additional effort of avoiding traffic / hungover pedestrians. Surroundings were pretty pleasant and to my huge surprise the big yellow star came out and the sky turned blue – like proper light blue!! Just continued running tbh – I went through about 3k where the inside of my ankle was painful – almost like i was going to get cramp (which I don’t often suffer) but through gritted teeth it wore off. At about 35K I was conscious that I was probably running short on fluid – I spotted a handy ‘Shop this way’ sign for the cyclists and found a Tesco petrol station – perfect! Chocolate bar consumed whilst re-filling my bladder and I was off again. Figured I’d keep going to 42K and turn around and that would take me home in the target 70K. 42K is almost a milestone for obvious reasons – it does feel a bit of a random one though.

I guess psychologically the return should be easier – you can fall into the trap of thinking about the parts that you know will be a struggle but by keeping the milestones small and regular it’s possible to put it to the back of your mind (for the most part). I have a general rule of not thinking about hot baths or warm food unless I’m within 10K of being home!

As it was getting later there were lots more people around – other runners and cyclists. Never quite understand why so many won’t return a nod or hello. It’s not a big ask. We’re all out enjoying the day, doing what we love and you’d think there would be an obvious connection. Maybe just ‘unrbanites’ these days?

At 60K I joined another path and spotted a runner about 50m in front. He was fairly shifting but feeling good I thought I’d have a go. Not entirely sure why or the point of it but in a second I was committed. Chased him, but he was going faster than I first thought. Took me 1K to get level and pass him – then the sudden realisation that I’d have to keep going at a ridiculous pace “why oh why did I do it?” Huge mistake. By 65K he was gone but so were my legs as were any remaining fluids. 5K in under 18mins at that stage was pretty stupid and now I was looking at every puddle with intent……”hmm, that one doesn’t look too dirty.”

So, struggled up the road and finally turned into my street at 72K (and missing 4,500 calories). The next 30mins are usually pretty painful and that’s exactly what they were. But I was soon in a bath with a bowl of pasta, a protein shake and a couple of pints of water with fruit juice. Recovery went well and by later in the night I didn’t feel like I’d been out. Some long compression socks overnight and I woke up fresh as a daisy!

A good day on my feet.

This entry was posted on February 27, 2011 by pyllon. It was filed under Running, Training, Ultra distance and was tagged with distance, marathon, running, training, ultra.