Thought I’d write-up my first race of the year – the D33 ultra in Aberdeen. Got up there Friday afternoon after a long drive and checked into the hotel. Then headed straight out to find Duthie Park – the race registration and start.

Fortunately was only about 15 mins on foot from the hotel. Park looked lovely considering the season and the thought of the next day finally arriving gave me that Christmas Eve feeling inside. You know the one 😉

And, if I wasn’t already excited enough we also managed to find the start line – wooohooo! I was at least in the right place. Fingers crossed the weather would hold-up – it was chilly but with clear blue skies and only a vague hint of wind. Could I really be that lucky?

Alarm went off at 5.30am. I know it might seem early for a 9.00am race start but I like to get my food down at least 3hrs before. I hate eating though when I’m technically still sleeping.

The silence in the hotel was deafening – I checked my phone just incase the clock was wrong. It wasn’t. The receptionist had promised to leave some cold boiled eggs for me and maybe even some bread. I just had to say to the night porter. So I got up, boiled a kettle and poured it into some porridge oats to leave it soaking for a while (having no other way of cooking it).

Nipped along to see the night porter who took me down to the kitchen. ‘Wait there’ he said and pointed me towards the standard hotel breakfast table (that already had the orange juice and milk sitting out – no wonder they’re often warm!). I didn’t need an invitation and quickly filled and necked a few glasses of orange juice followed by some swift milk chasers.

The porter then reappeared with 2 cold eggs and a filled toast rack and gestured for me to return from where I came. So I headed back to my room and sat on the floor forcing down the miserable food wondering why I had actually chosen to spend my weekend like this. 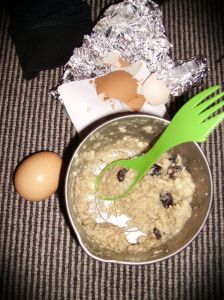 Drove down to the park for 7am (I hate being late) and I was the first one there. The guys were just setting up the tents for registration so helped them with that and within 30 mins I had my number. Seemed a friendly bunch – certainly more up my street that some of these huge city marathons.

I was desperate to get started but still had a while to wait. It’s always one of the worst parts for me – I hate the waiting around. Soon enough the carpark began to fill up and in no time at all it was a mass of lycra, running shoes and hydration packs. Everyone checks each other out (don’t deny it) and in the pre-race rituals we’re probably all walking around with an estimated finish time above our heads (just based on first impressions).

No nerves now, just keen to get through the first few miles and settle into a rhythm. Race started right on 9.00. I put myself pretty much at the front and whilst I have little experience racing (especially at this distance) I was comfortable enough sitting in 4th and didn’t feel too much like I shouldn’t be there. I guess the time and effort I’ve put into my training has given me a reasonable amount of confidence (although if I’m honest I never consider myself as being fit).

First 6 miles was pretty quick as was the second and despite feeling good I was mildly concerned about maintaining that pace. I had no real expectations anyway and I knew whatever happened I’d finish. So I just went with it. As long as I was home in no more that 4’25hrs I’d be happy enough.

Running shoes were great on the tarmac, but not exactly at home on the trail sections (maybe 60% of the course), and in particular the mud. I guess it’s not a natural environment for LunaRacers.

I pretty much ran on my own (no change from normal then) so had to pay attention to spot the orange arrows spray painted on the paths. How awful would it be to go the wrong way!?

At the turnaround I was in 6th place but starting to feel my legs as I went back past the runners who were still heading for the half-way point. Most were pretty friendly and encouraging which was really uplifting, so “well-done’s” were traded for the next 35 minutes or so.

With about 12miles still to go I was really suffering. The Cliff bar shot-blocks (that many people rave about) were a struggle to get down and I knew I wasn’t far from the end of my hydration bladder. And, just as the temperature was rising I also needed a pee. What now? Stop? And let another few people past??

Hmmmm, thought about it for the next 5 minutes and finally had to make a decision….

I kept running. Really had to dig deep to keep a steady pace. 2 or 3 people caught and passed me which was hard – there wasn’t much I could do about it though. Figured rather than fight them too much it was more important that I finish ok. This is where anything in your mind you can grab onto makes all the difference. I had received a surprising amount of well wishes from friends and family – good luck cards, tweets, and calls. So I kept them all front of mind and ignored the other voices / desires.

In the last 10K I caught one of the original leaders – he was walking. I stopped and gave him some energy sweets – he was suffering with his hip. We chatted for a few seconds and I moved on. He then caught me with about 2 miles to go and we both traded words of encouragement. He told me ‘focus’ and it was just what I needed to hear. I thought I was never going to arrive in the park but eventually I could see it. It was just a matter of avoiding the crazed dogs and kids and it would all be over. As I crossed the line, the guy that told me to focus was waiting – he thanked and congratulated me as did race organiser ‘George’ who shook my hand, gave me a hug and congratulated me by name. That was all I needed! It was done, in around 4hrs (and a top 10 finish TBC – results to follow). I sat on the grass for 2 minutes had a look at my medal, drank some fluids then headed for the car. Was cooling down so quickly I was starting to shiver and I needed food and a bath.

I think my family were pleased (maybe even surprised) with my performance? I was happy enough in that I’d learned a lot. Things I could change and things I could work on. And as I struggled to lift my heavy legs into a hot bath it crossed my mind that it was only 3 weeks until the next one – a slightly bigger challenge. Who knows what that will bring!

The @pyllon support team were particularly amazing – looked after me all weekend without any grumping – it made all the difference. Thanks to all the organisers, marshalls, runners and support on the day.  It was cracking and one I’ll remember for a while.

“Pass the weak, hurdle the dead.“