Tomorrow is the final race in the Scottish Ultra Marathon series (SUMS) – The River Ayr Way Challenge (RAW). 41ish miles from Glenbuck to Ayr. Liverpool fans might be aware of Glenbuck as it’s given the football world a very special individual indeed. There isn’t much else there now. 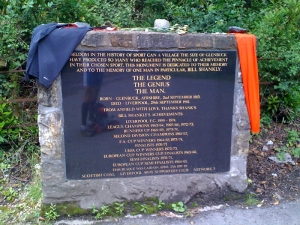 ……and for the road runners, we’ll also pass the place where Mr McAdam first developed the tarmac road surfaces that we take for granted today.

I’ve done part of the route once in training and if I’m honest I wasn’t crazy about that section. It was ridiculously overgrown which made it especially tiring / frustrating. Will be better just doing it once though rather than the out-and-back training run.

It has rained all day and forecast doesn’t look good for tomorrow – should be fun!

Good luck to all the runners / support / marshals.