In April that’s exactly what fell into my lap. Nathan had sorted out a booking at the Runners Refuge in Chamonix for a week of trails, nice food and inspiration. It was exactly what I needed at that time, having been through a busy period of work and the same repetitive training routes. I had a few key races coming up and hoped that I’d find something to give me that extra spring in my stride.

Chamonix is one of the oldest ski / winter sports resorts in France and was home to the first ever Winter Olympics in 1924. The impressive peaks of the Aiguilles Rouge attract mountaineers, climbers, mountain bikers and in the last 10-15 years, runners. It’s home of course to the biggest ultra in Europe, the Ultra Trail du Mont Blanc, it’s four races covering hundreds of miles of trail on and around the mountains – there’s no shortage of trails!

The Runners Refuge was set up by Chrissy and Karl who for many years have run catered chalets in Chamonix for skiers and snowboarders. But it was their passion for running that gave them the idea to set up the project. The idea was pretty simple – make a home (from home) for runners visiting the valley. From individuals to groups, for training or racing or just a place to meet like-minded people, ask advice on running routes, find out more about the trails, or just chat and hang out with other runners.

So when we arrived for the first time I wasn’t entirely sure what to expect. Was this going to be a dishevelled hostel? some kind of soul-less mini sports centre? or worse…some kind of running rehab ‘commune’? Fortunately not….

The chalet itself is nestled in Les Praz (about a 15 min walk from Chamonix town centre), so it’s peaceful and has a bit of space around it to take in the magnificent views of the Mont Blanc massif. Chrissy met us in the chalet and within 10 minutes we were totally at home, drinking tea and chatting about the trails and the views. “That’s one of the things that makes us different from other places in Chamonix” says Chrissy,

“it’s not just a place to stay, we like to spend a bit of time getting to know our guests.”

The following day we took up the offer of a run along some of the valley trails and we talked more about visitors to the refuge.

“We’ve met some amazing people including elite runners and journalists. We’ve had visitors from all over the world – Brazil, Australia, Persia…the list goes on. During the UTMB week we get people running their first big ultra as well as the seasoned runners wanting to make their mark on the big stage. We even had an American couple who came to run the UTMB together on their honeymoon.”

On returning to the chalet some freshly made smoothies appeared in minutes as Stevie and I eyed-up the hot-tub sitting on the deck with views to Mont Blanc on the north side and Brevent / Flegere to the south.

We spent the rest of the week either running for a few hours early morning followed by another run in the afternoon (Kenyan-style), or heading out mid-morning for most of the day. The choice of routes means that you really don’t have to do the same run twice, unless of course you want to. A RR early morning favourite is leaving straight from the chalet into the forest on the north facing side with a ‘gentle’ 300m climb before following the narrow winding paths for another 6K, bouncing over tree roots and rocks before arriving in the village of Argentiere. From there after crossing the river you can enjoy the great views of Mont Blanc back along a wooded trail and add a few more climbs towards the ski runs if you’re feeling spritely.

I went back again for a long weekend early August and there’s still so much to do. I spent more time on the south facing side of the valley (on Karl’s recommendation) and discovered some incredible views and trails before taking a run up to the Gouter Hut on Mont Blanc itself the following day. You don’t have to go to extremes however, there are miles and miles of well-marked lower-level routes (and you can easily head into Italy and Switzerland too).

No way around. On the Tete Rousse Glacier heading for the Gouter on Mont Blanc #running #chamonix #alps

On a night run with Chrissy and Karl on my list visit we spoke about who they’d most like to run with. As well as the ultra superstars like Killian Jornet (who spends a fair amount of time in Chamonix) they talked about 85-year-old trail runner Toni Gianola (who’s run over 400 mountain races) and how he’d be able to teach them a thing or two. A small point but an important one – it’s not about ego’s, we can all learn something from those just starting out, to the seasoned runners of all disciplines and with that in mind the Refuge looks to be heading in the right direction having already attracted runners of all abilities. Chrissy feels particularly proud that they’ve even converted non-runners into trail happy racers

“We had a guy stay through a recommendation and we suggested a few runs / hikes to him and he emailed us a few weeks ago to say he’s entered in his first ever trail race.”

So if you’re looking around for some relaxation, recovery, inspiration and training with bags of fresh air, in good company and on some of the best trails in Europe look up the Runners Refuge – just don’t take my slot!

#chamonix after a storm. Worth it! #runlong #mountains #picoftheday #instapic #sky #mountains #running 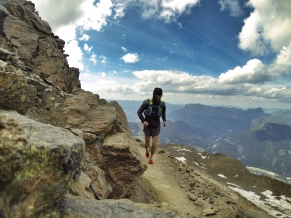