You asked…..so here it is. The view from the support team on what turned out to be one of the toughest races of my year. In her own words….my sister, Nicola (Vadar). END_OF_DOCUMENT_TOKEN_TO_BE_REPLACED

END_OF_DOCUMENT_TOKEN_TO_BE_REPLACED

Well, look what arrived the other day! 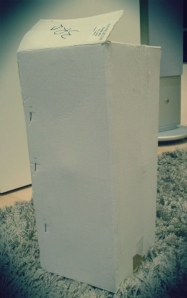 It’s not really that exciting is it? Well, it doesn’t really matter what it is or what’s inside the box. Not that I don’t care. I do. A lot. It’s the trophy for finishing 3rd in this year’s  Scottish Ultra Marathon Series.

Whilst I was well-beaten to 1st and 2nd, I guess it is an achievement considering the strength, experience and talent of the other competitors. I dare say I probably had a bit of luck along the way, although I have worked hard for it, completing 6 races and running as hard as I could in each one. More than acceptable in Season 1.

It’s just that the way I was presented it, was much more important to me than the accolade itself. There was no presentation, no clapping and no champagne.

It was given to me by the most important man that’s ever been in my life. My Dad. And, he shook my hand and said “Well done Son.” Does it really get any better than that? For me, no, I don’t think it does. I’ve had such incredible support from my Dad (and the rest of my family) all my life and trying not to let them down is something that courses through me, and always will. I guess the ‘white box’ was an opportunity for him to let me know that I’m doing ok – making every stride of each race (occasionally in the wrong direction), every 4.30am training run, every sickly energy gel, bout of cramp and lost toenail more than worthwhile. I’d do it all over again (except quicker!) for another one of those.

There was a race briefing 20 mins before the start. There were so many people around I couldn’t really hear what was being said. Next thing I knew I was saying my goodbye’s to my Support and making my way to the front of the startline. It was quite a sight – 150 or so runners all ready to do battle with whatever the WHW would throw at them over the next day. END_OF_DOCUMENT_TOKEN_TO_BE_REPLACED

On Saturday 21st May my brother raced his third ever ultra marathon, The Cateran Trail 55 and until a few months ago I must admit I had never really heard much about ultras, SUMS,  Jezz Bragg etc etc. I mean it was only last year that the boy actually starting running seriously (and did a few 10k races). END_OF_DOCUMENT_TOKEN_TO_BE_REPLACED