After the River Ayr Way race, it was home for a bath and some food, then pack some stuff for a few days in the Lake District with family.

We were so lucky with the weather and managed a few decent walks as well as some time relaxing and reading.

I also managed to get few runs in. The Coledale Horseshoe looked good on paper and didn’t disappoint. The route starts in Braithwaite. You can park beside the school easy enough (particularly if it’s before sun-up!).

Follow the road towards Cockermouth, passing a couple of paths both sides of the road to a small car park on the left (I guess you might be able to park there – it’s small though and probably fills up quick). The Grisedale path is marked and immediately starts with some fairly steep steps. Me being me, I blindly took the other path for a mile until I realised I’d gone the wrong way.  Turns out it was worth it anyway as the sun delivered a morning treat.

Grisedale Pike is pretty runnable although steep in parts and rocky underfoot, making a mis-judged step a potential sore-one. Near the top it’s hands on thighs stuff for a while.

From there I headed on over an ‘unamed peak’ (according to the guidebook) to Hopegill Head – again all runnable.

Then a quick left over Sand Hill and onto the saddle of Coledale Hause. From there it’s a really pleasant trail until you reach a junction. I chose to go right first and head up onto Grassmoor for some amazing views over Loweswater, Crummock Water and Buttermere. END_OF_DOCUMENT_TOKEN_TO_BE_REPLACED

I’ll keep it short.
Weather turned out pretty decent following the heavy rain on the Friday. Arrived at Glenbuck in plenty of time, registered and chatted to some friendly faces. Got ready to race – warmed up, then just hung about until they finally managed to gather everyone and start the race around 20mins late.

END_OF_DOCUMENT_TOKEN_TO_BE_REPLACED 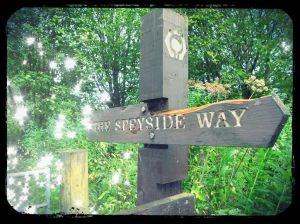 I was supposed to race the Devil ‘o the Highlands a few weeks before this but stomach problems meant that I couldn’t start. Was pretty gutted. Felt like I’d run out of luck as I’d had gastroenteritis just before GEDM earlier in the year.

So, next thing to focus on was the Speyside Ultra (part of the SUMS series). My folks had booked a cottage up in Buckie so we were all looking forward to a mini-break. My training since missing the Devil had gone pretty well and into race week I tapered and increased the carb intake from the middle of the week. On Thursday it appeared to strike again and I had the worst stomach (I won’t go into details) and the realisation that as well as an underlying issue I must be doing this to myself. I think I know what it is now so if anything, that’s a step forward (and another post). I couldn’t drive up on the Thursday as planned as I needed to be near a toilet so I set out on the 4.5hr drive on Friday with a decent supply of immodium.

The rest of the day was spent trying to get sorted – boiled rice, bananas, trip to the chemist. It wasn’t great and the stress of trying to get myself fit for the race probably wasn’t helping. END_OF_DOCUMENT_TOKEN_TO_BE_REPLACED

On Sunday I did something I haven’t really done before. I ran with someone! Well, not just ‘someone’, but the one and only John Kynaston. We live only a few minutes apart and arranged to meet up early Sunday morning. We headed up onto the Braes (Gleniffer) chatting our way through 11miles of up’s and down’s. John has such an obvious passion for running and his ultra experience is remarkable. It was a real pleasure to listen to some of his stories and his general thoughts on running. I was just disappointed when it was over.

It was a fitting end to a hard week of training and hope to do it again soon.

If you don’t already follow it, check out John’s blog here – it’s one of the best.

Taper-time now. Have a good week.

Like many other runners I have a somewhat unhealthy interest in shoes. My casual trainer ‘collection’ for years has been spilling out of the wardrobe. Whilst I don’t own lots of running shoes I am obsessed with finding the perfect shoe as well as having options for various conditions, distances and terrain for both racing and training. END_OF_DOCUMENT_TOKEN_TO_BE_REPLACED

Thought it about time I actually posted something. Been keeping my head down after the WHW race. It’s been a strange month and I’ve had a few injury concerns, but building back up to peak training weeks.

It doesn’t seem to be talked about much. Maybe it isn’t real? Or maybe it doesn’t affect the full-time athletes as much as there is no ‘normal’ to return to after the event. Most of us anyway have to return to our normal day-to-day working lives only days after a lengthy physical event like the West Highland Way race. I was back in work a couple of days after and whilst I expected it to be ok (at least for the first few hours) I wasn’t really prepared for the slump that followed.

I know it was only a race but I did learn a lot about myself and where I want to head. END_OF_DOCUMENT_TOKEN_TO_BE_REPLACED

There was a race briefing 20 mins before the start. There were so many people around I couldn’t really hear what was being said. Next thing I knew I was saying my goodbye’s to my Support and making my way to the front of the startline. It was quite a sight – 150 or so runners all ready to do battle with whatever the WHW would throw at them over the next day. END_OF_DOCUMENT_TOKEN_TO_BE_REPLACED

On Saturday 21st May my brother raced his third ever ultra marathon, The Cateran Trail 55 and until a few months ago I must admit I had never really heard much about ultras, SUMS,  Jezz Bragg etc etc. I mean it was only last year that the boy actually starting running seriously (and did a few 10k races). END_OF_DOCUMENT_TOKEN_TO_BE_REPLACED